Francis Bacon was one of the leading figurative painters of the late twentieth century. He lived and worked in 7 Reece Mews, South Kensington, London, from 1961 until his death in 1992. The studio with its heaps of torn photographs, fragments, of illustration and artistsâ€™ catalogues provided many of his visual sources. It’s documented that his studio became his complete visual works. Apparently, Francis rarely painted from life.

The dust was deliberately mixed into his paint. The studio was cluttered, paint splattered with thick layers of debris and toxic pigments. Which apparently exacerbated his acute asthma. 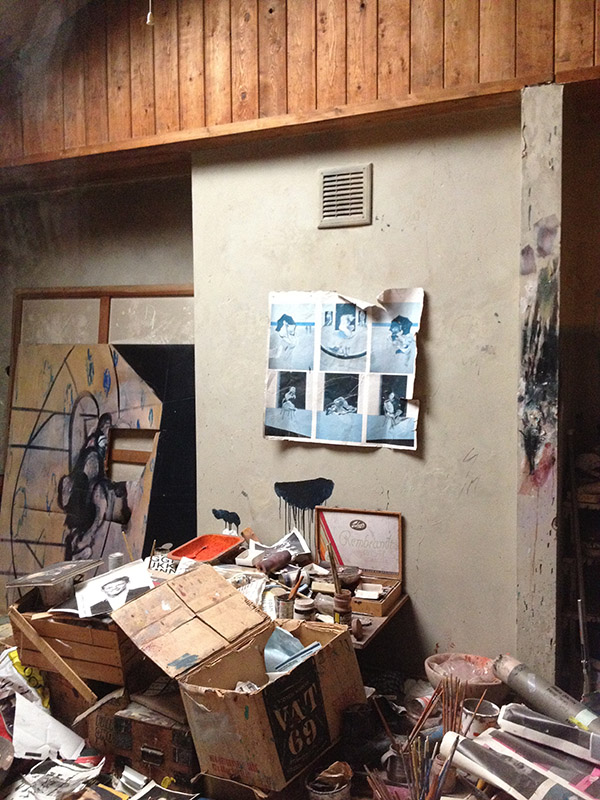 Francis Bacon’s entire London studio was transplanted and reassembled – every paintbrush and speck of dust, along with the walls and floorboards â€“ to the Hugh Lane Gallery in Dublin, Ireland. The studio took three years to reconstruct in a Dublin art gallery with every detail of the work-space faithfully re-created.

The studio was donated to the Hugh Lane Gallery in and a team of 10 archaeologists and conservators spent three years dismantling the room and its contents and transporting them across the Irish Sea.

Bacon was born in Ireland to English parents but he left Ireland when he was a teenager. He died in Spain in 1992. Â According to Brian Clarke, Francis Baconâ€™s executor, “Bacon once said that he’d never come back to Dublin until he was dead,”

“And I think frankly if he were here today to see what happened, I think he’d be touched but I think he’d probably roar with laughter as well.”

Francis Bacon’s studio was the ultimate creative mess. I recommend a visit if you are in Dublin.